You are here: Home / Serial Killers / 7 CRAZY FAMOUS SERIAL KILLER PSYCHOPATHS + (OCTOBER’S QUIZ TO DETERMINE ‘ARE YOU A PSYCHOPATH’) 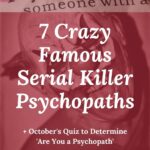 According to Psychology Today, a psychopath usually is one from genetics or congenital injury at birth than environmental factors. Extremely manipulative, they can easily gain trust but don’t necessarily form attachments.

Serial Killer Psychopaths and psychopaths in general, lack empathy and feel no remorse. Usually, their crimes are preplanned and highly organized and meticulous. From a criminal point of view, they are more dangerous than sociopaths because of their lack of empathy and remorse. 1

Are all Serial Killers Psychopaths?

Not at all. Not all Psychopaths are killers either. But let’s talk about a few of the more famous serial killer psychopaths.

Several characters in movies are loosely based on Ed Gein. Norman Bates (from Psycho), Leatherface, (from The Texas Chainsaw Massacre), and Buffalo Bill (from Silence of the Lambs) are three of the most iconic. Ed was also known as the Butcher of Plainfield. Between 1947 and 1952, Ed killed his mother and one more, and dug up over 40 graves to exhume and utilize body parts. Ed then created many items with human flesh, including purses, shoes, and was in the process of making a woman suit of his mother when he was captured. He died awaiting trial in 1968.

Charles Manson is one of the most famous cult leaders in history. Charlie is also a serial killer psychopath. Using psychopathic manipulation (brainwashing) to gain his followers, he formed the Manson Family in the 1960s. Although it has been suggested that Charlie also murdered people on his own, he is most famous for convincing his most loyal cult members to kill notorious people. Those followers killed 9 in 1969, at four locations.

Some of the most horrific murders were Sharon Tate (and her unborn child) and Rosemary LaBianca, both Hollywood Elite, and Abigail Folger, of the Coffee Family. Charlie and his followers were sentenced to death, but California abolished the death penalty, converting those sentenced to Life.

Charles died in prison in 2017. Other members of the Manson family have remained in prison since 1969.

Theodore Robert Bundy is a classic Serial Killer Psychopath. From 1974 to 1978 he killed approximately 30 people in California, Colorado, Florida, Idaho, Oregon, Utah, and Washington. He was found guilty and sentenced to death, but escaped in 1977. During that time, he committed the Chi Omega Murders in Florida and murdered a nine-year-old girl. He was recaptured in 1978 and executed in 1989.

Ted was known to be very sly and charming, which is how he lured his many victims. It took years for the authorities to catch him because no one would believe such an ‘upstanding” young man could commit such crimes. Ted is most famous for being a necrophiliac, which his own lawyer described as “heartless evil.”

Ted Bundy was executed in 1989 in Florida.

Dennis Rader, aka “The BTK Killer”

Bind, torture, kill—that’s the BTK Killer. Dennis was a church-going, calm, ordinary man. What was most interesting about his case is that there were several years where Dennis was dormant in between kills. Dennis is definitely considered a Serial Killer Psychopath.

Similar to The Zodiac Killer, the BTK killer liked to play games with the press. However, while the Zodiac Killer has never been caught, Dennis Radar got caught after a computer disk Rader sent was traced to his church.

Rader’s killings were centered around the sexual thrill and fantasy of bondage scenarios.

Dennis Rader was sentenced to 10 CONSECUTIVE life sentences, life without the possibility of parole for 175 years.

There are several versions of Aileen Wuornos’ story. She is on the record stating that the men she killed had attempted or raped her so she shot them in self-defense. The first of those men we later find out was a convicted felon for attempted rape. Could it be the truth? Only Aileen knows for sure. She also told stories that she had murdered each and every single one without provocation. That’s why Aileen is considered a serial killer psychopath.

Eileen was quoted as saying, “I killed those men, robbed them as cold as ice. And I’d do it again, too. There’s no chance in keeping me alive or anything because I’d kill again. I have hate crawling through my system…I am so sick of hearing this ‘she’s crazy’ stuff. I’ve been evaluated so many times. I’m competent, sane, and I’m trying to tell the truth. I’m one who seriously hates human life and would kill again.”

Eileen was sentenced to death for each murder. She was executed in Florida on October 9, 2002.

David Berkowitz, aka “Son of Sam”

The “Son of Sam” caused an entire city to panic in the mid-1970s. David Berkowitz (Son of Sam) began randomly shooting people with a .44-caliber revolver. You didn’t know who he was going to shoot or when. As a serial killer psychopath, he did have a type… women with long-brunette hair (Ted Bundy also had this type).

David started out as a serial arsonist but wasn’t caught as an arsonist until he went on his killing spree.

There are thoughts that perhaps Berkowitz suffered from paranoid schizophrenia. He has become a born-again Christian and mentors others in Prison. In 2016, he was again denied parole. He has been in prison since June 12, 1978.

Edmund Kemper is one of my favorite serial killer psychopaths. His intelligence absolutely fascinates me. He is known to have an IQ over 145. The only reason he was caught is that he turned himself in.

Unfortunately, Ed is also one of the worst serial killers known to man. He is a serial killer, rapist, and necrophile who murdered ten people, including his mother and grandparents. He has been nicknamed “The Co-Ed Killer”, and “The Co-Ed Butcher” due for his predilection of using a hammer and also dismembering his victims.

Mr. Kemper is also known for his large size, at 6 feet 9 inches, weighing 280 pounds. He is considered a giant. He used to frequent the same bars as the police, escaping their detection every time by talking about this crimes in the abstract. He is still in prison as of 2020

Ed murdered his grandparents when he was 15. At that time, he was diagnosed in prison as a paranoid schizophrenic and considered criminally insane. He was released at the age of 21 after convincing psychiatrists he was rehabilitated and non-threatening.

Kemper also had a type… young female hitchhikers. He would lure them in his vehicle and drive them to secluded areas, then after murdering them, take their corpses back to his home to be decapitated, dismembered, and violated.

In the end, he murdered his mother and one of her friends, then turned himself in to the authorities.

At his trial in 1973, Ed was found sane and guilty. Kemper then requested the death penalty for his crime, which was granted. However, California suspended the death penalty. Therefore, he received eight concurrent life sentences.

Kemper says he is happy in prison serving eight concurrent life sentences and waives his rights to parole hearings.

Although it is still unclear as to why, most psychopaths are men. Overwhelmingly.

Lots of them come to fill in the positions of police officers, lawyers and surgeons. The most notable career choice for a psychopath? CEO.

Top 10 States that have the MOST Serial Killers

True or False: Psychopaths are insusceptible to contagious yawning
The idea of “contagious yawning” is related to empathy. It’s the same as being more susceptible to laughter when someone else is laughing, or feeling sad when someone is crying. Even dogs will yawn if their owner or someone they are emotionally bonded to yawns. Unlike a psychopath, whose empathy is stunted, this wouldn’t necessarily be the case.

Want to know more? Take our Are You a Psychopath Quiz and see if you (or answer for someone you know) are a Psychopath, Sociopath, Narcissist, or Muggle (regular person).

Are you a Psychopath, Sociopath, Narcissist or Muggle? Take the Quiz

If you encounter a non-killer Psychopath, try the following:

Keep Watch on your emotions

Regardless of how frustrating or upset you are, don’t lose your cool. That gives the psychopath more power over you as he or she can manipulate your emotions.

Don’t let them see you are intimidated

Traditionally, a psychopath will use intimidation to control others. For example, threats, subtle or otherwise, stand over you when talking, use aggressive language. In this case, stand your ground. If you are being bullied or harassed, let human resources know.

Psychopaths like to use long-winded stories to paint themselves as a victim. Usually, a psychopath will blame anyone and everyone but themselves and never take responsibility for their wrongdoing. Don’t believe it.

Turn the Conversation Back on Them

Sometimes the best way to disarm a psychopath is to point out their flaws. As they blame others, turn the conversation back on them. NOT in an aggressive manner.

When Possible, use online Communication

Psychopaths excel at negotiating when they communicate face-to-face. 3 However, if you communicate only online with them, it makes it more difficult, and sometimes impossible for them to charm their way to something better.

If you feel you are being harassed or bullied, and feel physically afraid, call 911

Previous Post: « Missing Kids or Adults Flyer Template
Next Post: A Look Inside Murder by Degrees + 4 Solved and Unsolved Horrible Murders for this Month »