You are here: Home / Who Knows What to Call these / Extra Freaky Things 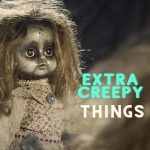 Check this space often for updates to extra freaky things

Let me quickly tell you about Edmund Kemper. Ed is a very famous serial killer/cannibal. If you have watched the show Manhunter, he was interviewed by the Behaviorally Analysis Unit in the beginning of their existence.

So as the story goes, Ed is considered a genius with an IQ of 145. He is a very large man, 6 feet 9 inches. Ed was called the “Co-Ed” killer because his victims were female college students.

At 15, he murdered his grandparents. The psychiatrists diagnosed him as a paranoid schizophrenic and sentenced to a State Hospital for the criminally insane.

Now here’s the disturbing part. At 21, Ed convinced his psychiatrists that he was rehabilitated. So guess what? Yup, he was released.

He is noted for his large size, at 6 feet 9 inches (2.06 m), and for his high intellect, possessing an IQ of 145. Kemper was nicknamed the “Co-ed Killer” because most of his victims were female college students. He then targeted young female hitchhikers after his release by convincing them to get in his vehicle. Ed would then drive them to a secluded spot where he would then murder them.

Since he is a necrophiliac, he would bring the corpses back to his home, where he would violate them, then dismember and decapitate the corpse. Before he was re-arrested, he murdered his mother and one of her friends.

The police did not catch him, he turned himself in.

Although previously determined to be not guilty by reason of insanity, this time it didn’t work. He was found sane and guilty in 1973 at trial. Kemper himself asked for the death penalty. However, at that time capital punishment was suspended in California. Therefore, Ed was given eight concurrent life sentences. He has waived his right to parole several times. He is still incarcerated and is said to be happy.

Sometime in the late 80s, I think, Good ole Ed got a few buddies together in prison and volunteered to record their reading of books for the blind. Ed said he felt good doing something for someone. Yikes! Anyway, here’s Ed reading Flowers in the Attic, in case it didn’t scare you enough the first time you read it. Here’s a short reading.

Mary Bell killed her first victim when she was about 10, and the second just a few minutes later.. She left notes about the killings and visited the monthers of the boys she killed, asking if she could see the body or if they were sad that their sons were dead.